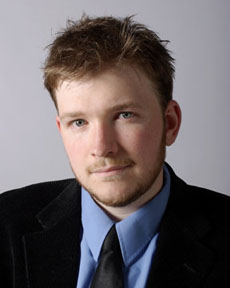 Tommy is a writer, producer and director who has worked with a number of organizations and has been the Managing Director of Forward Theatre for the past 8 seasons. He is a graduate of the The Vancouver Film School, the Income Managers Program, Centre for Cultural Management (University of Waterloo/CCCO/Genovese, Vanderhoof & Associates) and Humber Collegeâ€™s Community Arts Development Program. Tommy has also worked with Lorraine Kimsa Theatre for Young People , writing and performing for students. His stage directing credits include: The Mousetrap, Romeo and Juliet, Macbeth, King Lear and Asleep at the Wheel. He was also the multimedia designer, adaptor and director for The Antigone Project, Rope (adapted from the Alfred Hitchcock film), and Hamlet. For the 2006 Toronto Fringe Festival he co-wrote and directed his second production inspired from a Hitchcock film, Lifeboat. He recently co-produced 18 Hands Theatre Collectiveâ€™s The Famous Remains of Piggy Palace, directed by Sonia Norris and acted as multimedia design and dramaturge for Julian DeZotti’s Guns & Roses at the CanStage Raw! Raw! Raw! Festival of New Work, to be fully produced this winter at the Toronto Centre of the Arts. Tommy is currently the Producing Intern at Theatre Gargantua, the mentoree director of this years First Draft season and finishing writing his stage adaptation of Dear Everybody, which was recently given a staged reading at the CanStage Festival of Ideas and Creation.